Romeo & Juliet was written during a period when Shakespeare had found the strength of his writing. He would have been about 26 years old when he wrote it. It stands as a great play in its own right.

Romeo & Juliet is believed to have been written around 1595. The Nurse in the play refers to 'an earthquake eleven years past (Act II, scene 3, line 23). London experienced a strong tremor around 1580.

The story is, of course, about a pair of star-crossed lovers. Two teenagers pursue their love for each other despite the fact that their families have been at odds with each other for decades. The story combines swordfighting, disguise, misunderstanding, tragedy, humor, and some of the most romantic language found in literature all in the name of true love.

In Verona, Italy in the late 1500's, two powerful families the Montagues and the Capulets have been feuding with each other for years. Old Capulet, Juliet's father, throws a party to which he invites all his friends. The Montagues are not invited of course, but Romeo devises a plan to get a look at Rosaline; a young girl he has been pursing. He disguises himself and slips into the party. Once inside, his attention is stolen; not by Rosaline, but by Juliet. Romeo falls instantly in love, but is disappointed when he finds out that Juliet is a Capulet. Juliet notices Romeo too, but she is unaware that he is a member of the hated Montagues.

Later, after discovering that the young man who caught her eye is a member of the enemy family, Juliet goes out onto her balcony to tell the stars about her strong but forbidden love. At the same time, Romeo is lurking in the bushes below. He overhears Juliet confess her love for him to the heavens. No longer able to control his powerful feelings, Romeo reveals himself to her and admits that he feels the same. The very next day, with the help of Romeo's friend Friar Lawrence, Romeo and Juliet are secretly married.

On the day of the wedding, two of Romeo's friends, Benvolio and Mercutio, are walking through the streets of Verona when they are confronted by Juliet's cousin, Tybalt. Tybalt is out to get Romeo for crashing the Capulet's party so he starts a fight with his friends. Romeo shows up, but does not want to fight Tybalt because he no longer holds a grudge against Juliet's family. Romeo's friends can't understand why he won't stand up for himself so Mercutio steps in to do it for him. A swordfight with Tybalt follows. Mercutio is killed. To avenge the death of his friend, Romeo kills Tybalt, an act that will award him even more hatred from the Capulet family. The Prince of Verona banishes Romeo and he is forced to leave Juliet, who is devastated by the loss of her love. Juliet's father, not knowing of his daughter's marriage, decides to marry her to another young man named Paris.

In despair, Juliet consults with Friar Laurence. He advises her to agree to the marriage, but on the morning of the wedding, she will drink a potion that h e prepares for her. The potion will make it look like Juliet is dead and she will be put into the Capulet burial vault. Then, the Friar will send Romeo to rescue her. She does as the Friar says and is put into the vault by her heartbroken parents. 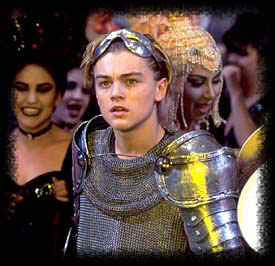 Bad news travels fast. Before the Friar can tell Romeo of the hoax, Romeo hears from someone else that his beloved Juliet is dead. Overcome with grief, Romeo buys a poison and goes to Juliet's tomb to die beside his wife. At the door of the tomb, Romeo is forced to fight Paris, whom he swiftly kills. Nothing will s top him from joining his love. Inside the vault, Romeo drinks the poison and ta kes his last breath next to his sleeping wife.

Moments later, Juliet awakens to see her husband's dead body. She learns what has happened from Friar Laurence who has just arrived and accessed the scene. With no reason left to live, Juliet kills herself with Romeo's dagger. The tragedy has a tremendous impact on both the Montagues an d the Capulets. The families are hurt so much by the death of their childre n that they agree to never fight again.