Within South Eastern Europe however, Romania preserved a significant number of traditional customs and celebrations manifest within the strong community of the village. Ceremonies dedicated to the significant moments of one's life (birth, wedding, death), to natural cycles (such as solstice, equinox, harvest, springtime) or to the big religious celebrations, follow the same archaic mythical rituals they did a thousand years ago. Even though preformed at the end of the 20th century in villages marked by modernization, such traditional rites haven't diminish their prestige. They still provide viable answers to how to live in harmony with the environment and community, that the present social and economical system cannot furnish. As a result of the historical time we live, most forms of traditional community life slowly vanished from the post-industrial civilizations of this century.


During winter solstice, when the sun is weak and frost and dryness take over, Romanian peasants conceived ceremonies to help the Sun and Nature to overcome this 'temporary crisis.' For 12 days between Christmas and St. John on January 7th, all Romanian villages have specific celebrations, starting with children's caroling on Christmas eve: Mos Ajun or Buna Dimineata (Good Morning).

Well spread throughout Romanian countryside is the caroling of the Ceata de feciori (the Young Fellows Crew). In Transylvania, Banat, Maramures, and also in Wallachia and Dobruja, young bachelors in groups of 6 to 25, go caroling around the village for 3 days. Irrespective of the time of the day, they are expected by the villagers with lots of food and their porch lights on at night time. These carols are considered to be some of the most valuable works of poetry in Eastern Europe.

New Year's is another period of festivities. Augural time, the night of December 31st puts forth dances with masks, divination, foretelling, and magic. The caroling repertoire is vast. Besides ritual songs such as Plugusor (little plough), Buhai (traditional drum), Capra (goat dance), Ursul (bear dance), there are carols for each category of individuals within the community (old, very young, young, newly weds, ready to marry, young parents, families without children, etc), for each profession (shepherd, farmer, bucket makers, soldiers), or for specific regions (such as Jiu dwellers). In certain villages, we can find gatherings as large as 100 people of smaller young fellows' crews singing together on the streets (Bukovinan Malanca). In Moldova, the choreography, costumes and ritual dances during the caroling festivities represent a genuine work of art. 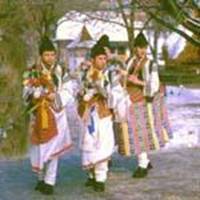 Running parallel to the public communal festivities, specific rites go on in private houses. Young women get together to guess about their future husband, and old people make prognoses according to the less conventional 'onion calendar.'

Children themselves perform specific carols: Sorcova, when they touch older family members with a stick adorned with artificial flowers and wish them good health and prosperity in the coming year, or Semanat (Tilling), when they symbolically toss wheat grains in people's yards to get good harvests during that year.

April and May festivities are connected to agricultural or sheep raising practices: Tilling Day (Maramures) or Choosing of the King (Transylvania), celebrating the first farmer to finish tilling and sowing. Similarly, Sheep Day or Milk Measuring celebrations (Banat and Transylvania) mark the moving of the sheep flocks up on the mountain to spend the summer. 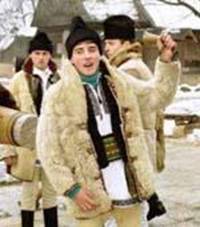 Around the summer solstice and coinciding with the Christian celebrations of Rusalii (Pentecost) and St. John Day's, Romanians traditionally practiced two ritual ceremonies dedicated to good crops and land fertility: Calusul, a dance performed by a special group of men (esp. in the Olt region and Wallachia) and Sanzienile and Dragaica, the Romanian versions of Midsummer's Day, with ritual dancing and singing by a group of young girls.

Harvesting is another time of celebration, thanksgiving, and preparation for the next crop. A symbolic wheat crown or braid is put in a special place next to the icons, their grains being later mixed with next crop's seeds. In the Saxon land, such a harvesting festivity is knows as Chirvai (kir-vy): a time when the community drinks from the sweet grape juice, parties, feasts and dances.

Other types of festivities are Hramuri and Nedei. An old tradition from Moldova and Northern Transylvania, hramuri represents the day to celebrate the patron saint of a particular church. Closer or more remote villages come in a procession to that church, while the hosting village organizes a big communal feasts. September 8th, the hram of St Mary, is the day when the caldarari Roma get together to the church of Costesti (Valcea county) and when they also delimit their clans and territories and display their possessions.

Nedei are a sort of regional fares from South Western Transylvania, Banat or Gorj, mostly determined by the church procession (hram). People get together to exchange their produce and to celebrate for a day. Originally these gatherings took place outside villages, at major crossroads on higher plateaus. There are two places where such Nedei still take place independent of a church procession: on Gaina Mountain on July 20 and on Penteleu Mountain on June 24.

Besides the daily bread, there is the ritual bread whose presence is compulsory at celebrations and feasts (at Christmas, New Year's Eve, Easter, at celebrations of the dead - in Romanian 'mosii' - in winter, spring, summer or autumn or of the life cycle - birth, marriage, death). During these special moments it takes the shape of a knot, communion bread, pretzels, flat cake, sweet cream cheese cake ('colac', 'prescura', 'covrig', 'turta','pasca'). The differences in shape and ornaments vary according to the ritual function, with the anniversary to be celebrated and in which the 'colac' is offered as a gift. The most frequent symbols are the cross, the solar circle, the bird, man (photography with various types of pretzels, ornaments, moments, occasions: wedding, burial, the carol singing from house to house, the harvest wreath). There is also another more recent kind of ritual bread prevailing all over the country: the pound cake ('cozonac'). Its dough is obtained by mixing wheat flour, yeast, milk and butter. In the resulted dough we add pounded nuts, raisins, and, sometimes nowadays, cocoa and Turkish delight .The mixture is portioned, poured into metallic tins and baked in the oven. A strict ritual function could be identified in focusing on another wheat-dish, in Romanian called 'coliva' (crushed wheat-grains, boiled in water, sweetened with sugar or honey and mingled with nuts) offered at funerals and at funeral repasts (projection with the image of 'coliva').

People's existence was marked by the big annual religious celebrations and fasting, by starting or finishing agricultural activities, winemaking, or fruit harvesting, or by the seasonal move of the sheep downward in the valleys or up on the mountains. Important were also the times when medicinal or mystical plants were in flower or needed to be picked up. Each of these moments was given a ritual character and a memorable meaning, as people behaved differently, dressed festive and used metaphoric language.

In Romania, 1 of March is the day when men offer women a kind of  amulet and two knitted silk tassels: a white one and a red one. March 1st marks nature's comes back to life and the beginning of the Lent (Easter Fasting). Some Transylvanian villages celebrate rites of fire purification and keeping away the bad winter spirits known as the Bonfires or Village Shouting.

There are many stories trying to explain the meaning of this ancient custom. The most popular is the one of the young man who fought with the bad dragon in order to release the sun imprisoned in an old castle, impeding the arrival of spring. The young man defeated the dragon, the spring came, but the hero was severely injured. His blood trickled on the white snow. People showed their consideration for the sacrifice of the young man by making amulets: a silver coin with the two tassels, the coin representing the sun, the source of life on the Earth.

Another theory says that red (as the sun and the fire) is the symbol of the vitality of women and white (as the pure cold snow or as the clouds) the wisdom of men, the woman and the man representing by their union the life. In Romanian the amulet is called 'martisor', its name coming from the month of March (martie in Romanian). A long time ago, the women used to offer the amulets to the man they loved, but today the things are changed, men offer these amulets to all women they know or work with, as an expression of their consideration. Other traditional amulets are: chimney-sweeper, horseshoes and clover sheets.

That is the first celebration of spring in Romania.

A week later, on 9 of March, is the religious holiday of 'Mucenici', a kind of All Saints' Day, celebrated in memoriam of the 40 martyrs killed in Sevastia because of their religion - Christianity, about more than 1500 years ago. Housewives prepare pretzels in form of number 8, then they make a kind of soup with a lot of sugar, nuts and cinnamon and of course the pretzels. There is also a tradition to drink 44 glasses of wine.

But the most important religious holiday in Romania is, of course, Easter. Romanians paint eggs especially in red. Romanian folklore presents several Christian legends which explain why the eggs are painted in red on Easter and why they became the symbol of the celebration of Christ's Resurrection. Easter is one of the major Christian holidays, yet its celebration is uniquely influenced by ancient fertility rites connected to the spring equinox. In some Romanian villages, Easter is celebrated alongside with pre-christian customs that relate to universal human symbols such as fire, water, the egg, and the wheat (bread).

The most wide-spread legend tells us about Virgin Mary, who came to mourn her crucified son, laid the basket with eggs near the cross and they reddened because of the blood that was flowing from Jesus wounds. The Lord, seeing that the eggs reddened, said to those who were there: 'From now on, you too shall paint the eggs in red to remember my crucifixion, as I did today.' But there is another tradition that became a true art: decorating eggs with folk motifs symbolizing renewal and immortality: the cross, the star, the sun, the wave, the zigzags, and stylised flowers.

Prior to decorating eggs, these are washed with warm water and vinegar, boiled slowly not to break their shell, and covered with a thin bed of bee wax. Then the eggs decorated using special tools, such as: goose feather, the 'chisita' (special tool, made of a thin metal pipe, with very small diameter; a pig hair is pulled through it) is used for 'writing' the motive and the 'brush' (a tool that is used for covering the larger spaces - thick lines, points etc.). Vegetal colours obtained from sweet apple peal, leaves and flowers, hip rose peal, are used.