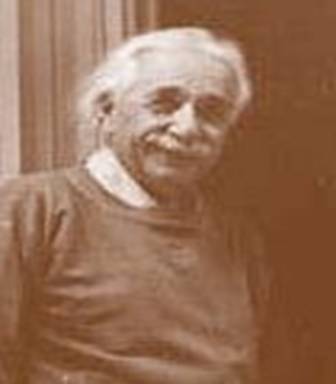 
In Ulm, Germany on March 14, 1879, one of the greatest physicists was born, Albert Einstein. While still an infant, Einstein's parents moved from Ulm to Munich. During their time in Germany, Hermann and Pauline Einstein ran a business that manufactured electrical parts. This business failed in 1894 and the family moved to Milan, Italy where Hermann became a featherbed salesman. Upon graduating High School, Einstein would enroll in ETH (the Federal Polytechnic) in Switzerland where in 1901 he would obtain his Swiss citizenship and renounce his German citizenship. In 1933, during the beginning of the persecution of Jews by Nazi Germany, Einstein flees Europe for the United States where he obtains his US citizenship while still maintaining his Swiss citizenship. On April 16, 1955 at the age of 76, the world looses the greatest scientific mind to heart failure.

Einstein's fascination with the physical world began as a child where in 1884. Upon graduating from ETH in 1900 as a Mathematics and Physics teacher, Einstein got a job as a tutor and then in 1902 with the patent office in Bern, Switzerland. He remains at this post for a number of years. During this time he continues examining the physical world during his off hours. In 1905 he would publish three papers one on the electromagnetic theory and the photoelectric effect (which became the basis for quantum mechanics), the second which Einstein called his special theory of relativity (which is now known as the Theory of Relativity) and the third which studied statistical mechanics and provided convincing evidence for the physical existence of atom-sized molecules (which was influential in the development of the atom bomb.) One of these papers he submitted to University of Zurich where he was awarded a Ph.D. and in 1908 he became a lecturer at University of Bern. Einstein continued his studies and began refining his theories. In 1919 the British eclipse expeditions confirmed Einstein's predictions about the general theory of relativity and he became a 'star' with the popular press. He received a number of posts at universities across Europe including the University of Berlin. He eventual achieved the highest honor a Nobel Piece Prize for his first 1905 paper, the theory of photoelectric effect, in 1921. In 1933 with the rise of Fascism in Germany, Einstein is identified as a Jew and to avoid persecution he moves to Princeton, New Jersey, United States, where he secures a post with the Institute for Advanced Study.

Einstein became a father in 1902 to a daughter. At the time, Einstein and the girls mother Mileva were not married. The daughter was named Lieserl and was eventually given up for adoption. Not long after she became ill and all records of the girl ceased to exist. In January of 1903, Einstein and Mileva marry and have two sons (Hans Albert. in 1904 and Eduard in 1910.) In 1914 the family moved to Berlin in April and three months later Mileva and the boys move back to Zurich and Mileva begins divorce proceedings. In 1917, Einstein becomes seriously ill and is nursed back to health by his cousin Elsa whom he marries in 1919. In 1933 Elsa and Einstein move to the United States where Elsa dies in 1936 after a brief illness. Mileva dies in 1949.