Since the 18th century the maple leaf has been connected with Canada. The leaf is regarded as the most important national symbol of Canada since 1965. Since then Canada has also got its own flag.

The currency is the Canadian dollar 1 can$ = 100 cents

The Canadian landscape is very different. Plains with fertile farm land can be found as well as huge mountain ranges, lakes and rivers.

The huge mountain ranges in the eastern areas are the Torgat Mountains, the Appalachians and the Laurentians. In the west there are the Rocky Mountains and the Mackenzie Mountains. The Pelly Mountains and Mount St. Elias are in the north. The highest mountain is Mount Logan in the Yukon - territory.

There are a lot of big lakes in Canada. The biggest is Great Bear Lake.

Canada's longest river is the Mackenzie River in the Northwest - territories. Other big rivers are the St. Lawrence River, the Churchill River, the Nelson River.

In the St. Lawrence - valley dairy farming and potato farming is managed. Wheat is grown in the prairies. The timber industry is very important. Canada has a lot of mineral resources like oil, natural gas, iron ore, uranium, copper and nickel. The most important branches of industry are food and drink industry, construction of motor vehicles, paper, textiles and clothing industry also chemical, electrical, oil and coal industry. The basis of the Canadian industry is the cheap power supply with water power.

The Canadian government set up more than 100 historical places, which played a part in the country's history.

Canada's 37 national parks are spread over the whole country. The oldest one is the Banff National Park on the east side of the Rocky Mountains in Alberta. It opened in 1885. The Vuntut National Park in the north of Yukon opened in 1993.

In June 1996 Canada had 28,8 million inhabitants, which is 0,5 percent of the population of the earth.

percent of all Canadians live in a city, only 23,4 percent have their home in the country.

In Toronto, Montreal and Vancouver live 31 percent of the Canadian population.

There are only five countries (USA, Switzerland, Luxembourg, Germany and Japan) where the standard of living is higher than in Canada. But Canada has a higher life expectancy and regarded to education Canada leaves Japan behind. More than 65. per cent of the Canadians have a house of their own and Canada has one of the best telecommunication systems. 99 per cent of the Canadians have a telephone.

The education differs from province to province. So the attendance of primary school covers six to eight years. The university basis study could take three to four years.

The most played sports are swimming, ice hockey, basketball, golf, cross - country skiing and skiing. The popular sports are football and baseball. 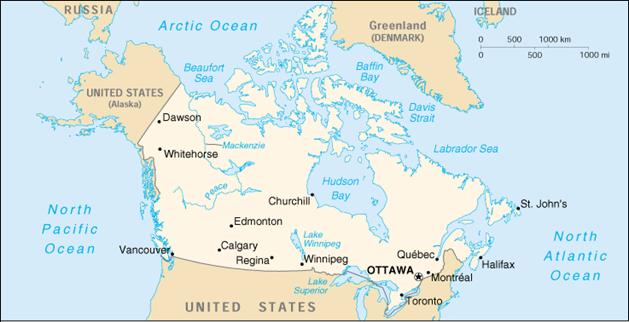