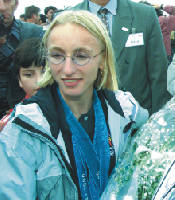 The record of Gabriela Szabo: 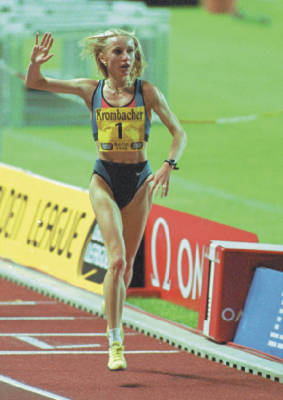 
For distance running fans in the U.S., their lasting memory of Gabriela Szabo may be watching her make up a seemingly unsurmountable gap to outlean Suzy Favor Hamilton in the 1,500m at the 2000 Prefontaine Classic. However, the 24-year-old Romanian was simply protecting her more than two-year-old winning streak -- a streak that indicates her place among the top runners in the world. Though that streak has since been broken, Szabo is unquestionably one of the best middle distance/distance runners in the sport today, if not the best.

As a child, Szabo participated in swimming and gymnastics. When it became apparent that she wasn't going to be good enough to make the Olympics, she switched to track. At the age of 13, Szabo was discovered Gyongyossy Zsolt while dominating a 600m race. She then left her native Bistrita to train at the prestigious Rapid Bucharest Sports Club. As a 15-year-old in 1991, Szabo won the European Junior 3,000m title, then went on to repeat that win in '92, '93 and '94. She also won gold (1994) and silver (1992) medals at that distance at the World Junior Championships. She made a smooth transition to the senior level, winning bronze medals at the European Championships and the World Cup. And at age 19, she became the youngest World Indoor Champion in history, winning the 3,000m.

At the 1996 Olympics in , Szabo finished second to 's Svetlana Masterkova in the 1,500m. That silver medal was a great disappointment to Szabo, who had expected and promised gold. Earlier in the Games, she had failed to qualify for the 5,000m final -- an event that was considered her best chance for a medal. At the 2000 Games in , Szabo outkicked 's Sonia O'Sullivan in the 5,000m to win the gold medal and erase the disappointment of . Later in the Games, she came back to win a bronze medal in a tactical 1,500m race.

Szabo has become so well-known in that she finds it difficult to train at home. Instead, she has spent much of her time training on a farm near Potchefstroom, South Africa. While there, she can avoid media attention and train in relative seclusion, with only her husband/coach, her physiotherapist and cook nearby. She told reporters, 'I sleep up to 16 hours a day. I wake up at 7:00 a.m., eat two slices of bread and go back to sleep again for another hour and a half. Then I go out and run 20-22 kilometers, eat comething and go back to sleep again. In the evening, I run the rest of the distance, to total up to 35 kilometers a day.'

On October 2, 1999, Szabo, 24, and her coach, Gyongyossy, 37, were married in Bucharest. They didn't make their much-rumored romance public until shortly before the wedding. Eventually, Szabo would like to devote more time to her family and less time to training, 'After four or five years, I would like to take time off and have a baby. After that I will decide what to do with my career,' Szabo said in 2000.

At the Olympic Games in Sydney, CS Rapid won the Olympiad Gold with Gabriela Szabo

On a giant arena, filled with spectators, the feminine 5000 meters trial was announced. Among the athletes lined at the start we could clearly distinguish the Romanian Gabriela Szabo in red and yellow equipment. When the pistol went out, every runner was searching for the perfect spot. That spot was for Gabi, somewhere in front. The Yugoslavian Olivera Jevtic was leading the squad and after the first few laps it seemed she was running the show. After a few hundred meters the three Ethiopians qualified in the finals were grouped at the front.

Eight laps before the final run the Yugoslavian forfeited. At the last lap where the true battle for the medal took place, Gabi and the Irish Sonia O'Sullivan, ahead taller than the other runners, launched the battle for the Olympic title. Gabi was leading the squad. The Irish tried to make use of her advantage but the Romanian increased her pace and won by 23 hundredths of a second. 14:40.79 was the new Olympic record. The first title on the Olympic games of Romanian athleticism after a twelve-year break. And the only title that Gabriela was missing. Emotions overtook her and for the first time she let her tears loose.
Declared athlete of the world last season, Gabi Szabo honoured her calling card and secured the only title she was missing. The little blonde, weighing only 42 kg also owns two more titles for World Champion for the same distance, won in 1997 and 1999, a World Title and a European Title for 3000 meters and last year she won the Golden League Circuit. After the extraordinary final of the 5000 meters course, she made a first statement: 'I feel fantastic. It was tough but I had the speed to stay ahead.' Afterwards she ran the honour tour clad in a tricolour flag that the swimmer Beatrice Caslaru offered.