Louisa May Alcott was born on November 29, 1832, in . When she was almost 2 years old, Louisa's family moved to , the state where she lived the bulk of her life. The family moved many times over the years, usually back and forth between and (). Some notable places Louisa lived were 'Fruitlands' in , ; 'Hillside' in ; and 'Orchard House,' also in . 'Fruitlands' was the site of her father's attempt at Utopian living, which she wrote about in Transcendental Wild Oats, thirty years later in 1873. Louisa's childhood at '' (later renamed 'Wayside' by Nathaniel Hawthorne, when he lived there) served as the basis for the action in her most popular novel, Little Women, which she wrote as an adult living in 'Orchard House.' Interestingly, these latter two houses were located next door to each other, with a walking path through the woods between. They are both still standing and open for tours in .

Louisa May Alcott's father, Amos Bronson Alcott, was an important--though controversial--man in his times and in his community. He is perhaps best known for being a philosopher and an education reformer, but he was also a leader in the Transcendentalist movement as well as a teacher, school superintendent, and an author [Moore and Dapper]. He established both the , in , and the Concord School of Philosophy. Although he was a loving father, he was not very responsible or practical, so Louisa's mother, Abigail May Alcott, filled the role of 'head of household'. Just like Jo, the protagonist in her Little Women, Louisa had three sisters--one older (Anna Bronson Alcott) and two younger (Elizabeth 'Lizzie' Sewall Alcott and Abba May Alcott). And, much like Jo's sister Beth, Lizzie died at age 22 from complications of scarlet fever. But, unlike Jo, Louisa also had a little brother, who died as an infant [Dapper].

Louisa May Alcott was a versatile writer who started at an early age. At the encouragement of her father, she kept a diary as a child--which probably helped her to discover her love and talent for writing and surely provided ideas later for her various plots and characters. As a teenager, Louisa wrote several plays, poems, and short stories. She achieved publication for the first time at age nineteen, with a poem entitled 'Sunlight' (1851), which she wrote under the pseudonym, 'Flora Fairfield' [Myerson and Moore]. The title of Ms. Alcott's first published short story was 'The Rival Painters: A Tale of Rome' (1852) [Myerson and Dapper], and her first published book was Flower Fables (1854), a collection of short fairy-tale stories and poems which she had originally created to entertain Ralph Waldo Emerson's daughter Ellen. Louisa May Alcott wrote her first novel, The Inheritance, at age seventeen, but it went unpublished for nearly 150 years until 1997, after two researchers (Joel Myerson and Daniel Shealy) stumbled across the handwritten manuscript in the Houghton Library at [Myerson]. Of course, Ms. Alcott is best known for a different novel, Little Women, which she wrote in two parts. The first volume, alternately titled Meg, Jo, Beth, and Amy, was published in 1868, and the second volume, Good Wives, was published in 1869. Like Jo in Little Women, Louisa also wrote many 'blood and thunder' tales, which were published in popular periodicals of the day. She did not openly claim authorship for many of these Gothic thriller stories, however:  for some, she used the pseudonym, 'A. M. Barnard'; for others, she chose to remain completely anonymous. For a complete list of Louisa May Alcott's writings, see my page entitled 'Louisa May Alcott: List of Works'.

Louisa May Alcott's career was not restricted to writing. Beginning in her late teens, she worked as a teacher for several years [] and off-and-on as a seamstress [MacDonald]. In December of 1862, at age 30, she traveled to , , to serve as a Civil War nurse at the in . The following year, she re-wrote her letters detailing that experience, to form Hospital Sketches, which was published first serially and then as a book [MacDonald]. And, in the winter of 1867/68, Ms. Alcott became the editor of Merry's Museum, a children's magazine [Dapper and MacDonald]. Louisa Alcott also was an avid social reformer. Abolition, temperance, and educational reform were among her chosen causes. But being a feminist at heart, she especially fought for women's rights, including suffrage. In fact, she was the first woman to register to vote in [MacDonald and Moore]. Unlike Jo in her Little Women, Louisa May Alcott never married. She died at age 55 on March 6, 1888, (two days after her father) and is buried on 'Authors' Ridge' in 's , with her family. Nearby are the graves of her friends and mentors Ralph Waldo Emerson, Nathaniel Hawthorne, and Henry David Thoreau. 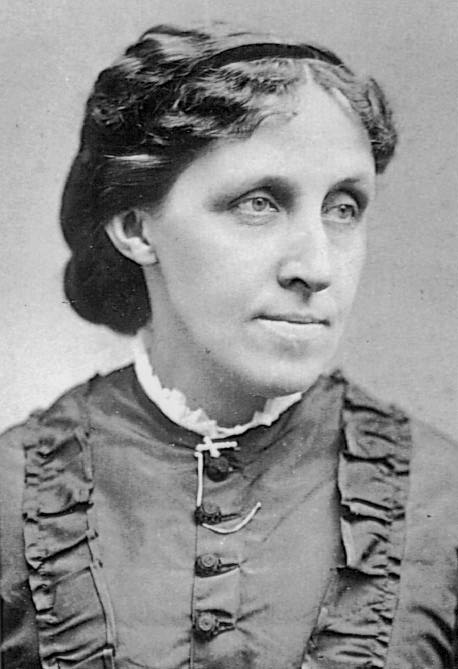