In 1985 Klaus von Klitzing won the Nobel Prize for discovery of the quantised Hall effect. The previous Nobel prize awarded in the area of semiconductor physics was to Bardeen, Shockley and Brattain for invention of the transistor. Everyone knows how important transistors are in all walks of life, but why is a quantised Hall effect significant?


Over 100 years ago E.H. Hall discovered that when a magnetic field is applied perpendicular to the direction of a current flowing through a metal a voltage is developed in the third perpendicular direction. This is well understood and is due to the charge carriers within the current being deflected towards the edge of the sample by the magentic field. Equilibrium is achieved when the magnetic force is balanced by the electrostatic force from the build up of charge at the edge. This happens when Ey = vxBz .The Hall coefficient is defined as RH = Ey /Bzjx and since the current density is jx = vxNq , RH =1/Nq in the case of a single species of charge carrier. RH can thus be measured to find N the density of carriers in the material. Often this transverse voltage is measured at fixed current and the Hall resistance recorded. It can easily be seen that this Hall resistance increases linearly with magnetic field. 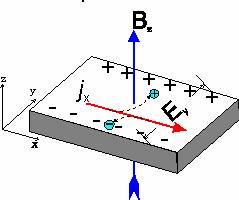 In a two-dimensional metal or semiconductor the Hall effect is also observed, but at low temperatures a series of steps appear in the Hall resistance as a function of magnetic field instead of the monotonic increase. What is more, these steps occur at incredibly precise values of resistance which are the same no matter what sample is investigated. The resistance is quantised in units of h/e2 divided by an integer. This is the QUANTUM HALL EFFECT. 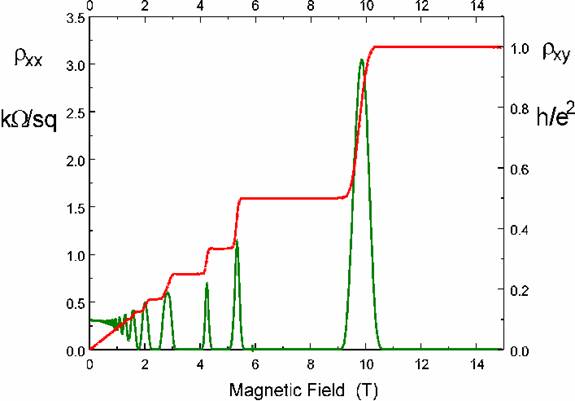 The figure shows the integer quantum Hall effect in a GaAs-GaAlAs heterojunction, recorded at 30mK. The QHE can be seen at liquid helium temperatures, but in the millikelvin regime the plateaux are much wider. Also included is the diagonal component of resistivity, which shows regions of zero resistance corresponding to each QHE plateau. In this figure the plateau index is, from top right, 1, 2, 3, 4, 6, 8. Odd integers correspond to the Fermi energy being in a spin gap and even integers to an orbital LL gap. As the spin splitting is small compared to LL gaps, the odd integer plateaux are only seen at the highest magnetic fields. Important points to note are:

The value of resistance only depends on the fundamental constants of physics:

The QHE can be used as primary a resistance standard, although 1 klitzing is a little large at 25,813 ohm!

Explanation of the Quantum Hall Effect 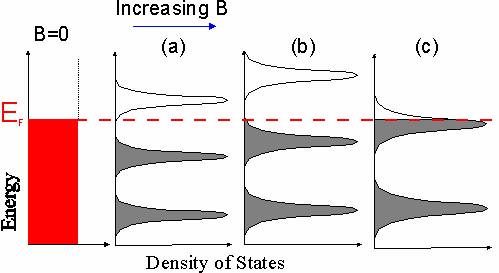 The zeros and plateaux in the two components of the resistivity tensor are intimately connected and both can be understood in terms of the Landau levels (LLs) formed in a magnetic field.


In the absence of magnetic field the density of states in 2D is constant as a function of energy, but in field the available states clump into Landau levels separated by the cyclotron energy, with regions of energy between the LLs where there are no allowed states. As the magnetic field is swept the LLs move relative to the Fermi energy.


When the Fermi energy lies in a gap between LLs electrons can not move to new states and so there is no scattering. Thus the transport is dissipationless and the resistance falls to zero.


The classical Hall resistance was just given by B/Ne. However, the number of current carrying states in each LL is eB/h, so when there are i LLs at energies below the Fermi energy completely filled with ieB/h electrons, the Hall resistance is h/ie2. At integer filling factor this is exactly the same as the classical case.

The difference in the QHE is that the Hall resistance can not change from the quantised value for the whole time the Fermi energy is in a gap, i.e between the fields (a) and (b) in the diagram, and so a plateau results. Only when case (c) is reached, with the Fermi energy in the Landau level, can the Hall voltage change and a finite value of resistance appear.


Although it might be thought that a perfect crystal would give the strongest effect, the QHE actually relies on the presence of dirt in the samples. The effect of dirt and disorder can best be though of as creating a background potential landscape, with hills and valleys, in which the electrons move. At low temperature each electron trajectory can be drawn as a contour in the landscape. Most of these contours encircle hills or valleys so do not transfer an electron from one side of the sample to another, they are localised states. A few states (just one at T=0) in the middle of each LL will be extented across the sample and carry the current. At higher temperatures the electrons have more energy so more states become delocalised and the width of extended states increases.


The gap in the density of states that gives rise to QHE plateaux is the gap between extended states. Thus at lower temperatures and in dirtier samples the plateaus are wider. In the highest mobility semiconductor heterojunctions the plateaux are much narrower.


Some Interesting Variants on the QHE


In very high mobility samples extra plateaux appear between the regular quantum Hall plateaux, at resistances given by h/e2 divided by a rational fraction p/q instead of an integer. This is the fractional quantum Hall effect (FQHE). Early observations found that q was always an odd number and that certain fractions gave rise to much stronger features than others. The FQHE is much more difficult to explain since it originates from many electron correlations, but for this reason has been of great interst to theoreticians and experimentallists alike.


In some materials there are more than one species of charge carrier. These may be elecrons in different conduction band minima, different spatially confined subbands or electrons and holes simultaneously present. The numbers and mobilities of all the species have to be considered to find the transport coefficients.